Leadership Kitsap’s Economics Challenge Day was held at Watson Furniture on December 9, 2022. It was an engaging day learning about Kitsap’s many economic drivers, change leaders, and pandemic response.

The day began with a guided reflection on the Positive Leadership capacity Advocacy facilitated by Lowell Sweet (LK04). To set the tone and purpose for the day.

“Everyone has the power to advocate–the ability to hold something up to the world as important. What is sorely missing is not the potential to advocate, but the purposeful intent to advocate effectively.” – The Positive Leadership Academy

Executive Director of PSNS & IMF, Rick Tift (LK00), expanded on the importance of the Navy and government’s presence to Kitsap County’s economic vitality and the economic advantage of doing business in Kitsap County. Rick shared the goals of the shipyard to include a focus on the community outside the gates, improving and investing in our local systems for the betterment of everyone in our area.

During our break, the Greater Kitsap Chamber Gnome on the Roam, Kitsap Kelly, showed up in our classroom to promote shopping local and the importance of reinvesting your dollars locally. 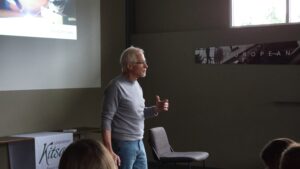 Clif McKenzie, CEO Watson Furniture Group, shared the story, products, and guiding principles behind the local, award-winning manufacturing company and the challenges of building office furniture when many have still not returned to a traditional office space. The class had the privilege of taking a guided factory tour to see first-hand the execution of soulful design, guided by the functional needs of their clients with a respect for materials, processes, and planet.

Advocating for others is something leaders always do. Whether advocating for employee needs, for volunteer resources, or for clients’ staples, a leader must be in tune with the needs of others. Lowell Sweet (LK04) facilitated a group discussion and interactive game to put into practice the advocacy skills learned this month. A small group of leaders went to another room to discuss their needs and advocacy strategy. While they were gone, the large group talked about the potential real-life situations people may face where advocacy is needed. When the small group returned, they advocated to the large group on a controversial topic, which ultimately showed the innate split on how people view a subject. 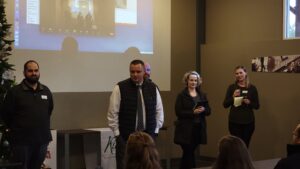 Irene Carper (LK10), Port Madison Enterprises Chief Executive Officer and PME Ambassador described the positive impact the Tribe and PME have on Kitsap’s economy including their many commercial activities, and how the Tribe gives back to the community through several different avenues. 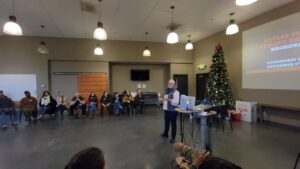 The class toured Watson Furniture Group’s workshop and offices before hearing from Angela Bennink of Kitsap Public Utility District (KPUD) on Broadband. They were surprised to learn there is a lot more to it than just putting lines in the ground. Angela shared KPUD’s intent to serve the community affordably by using and updating existing resources. 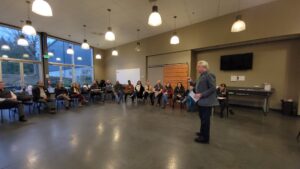 Using Broadband as the jump off topic, Councilman Ed Stern of the City of Poulsbo facilitated the infamous Advocacy Circle. The class were dividing into three advocacy groups, presented controversial topics to advocate for, and after a heated, passionate discussion, debriefed the importance of heart, logic, and respect in advocacy.